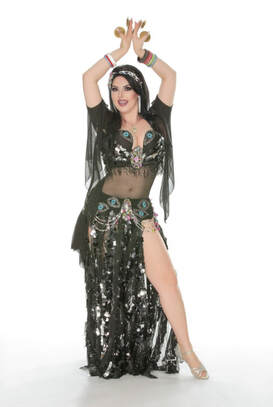 Vanessa is a an American-born dancer, who has been living and dancing full-time in Egypt since 2008. To date, she is the first and only American woman to start and operate a production company in Egypt.
Vanessa has held contracts in 5 Star hotels, in addition to dancing and acting in plays at Balloon Theatre—one of Cairo’s most famous establishments. Since 2011, she has been invited to numerous countries to teach and perform, and she is thrilled to share her insight, experience and love of dance with you!
Vanessa holds a BFA in Ballet from Texas Christian University.
For more info about Vanessa, visit: www.vanessaraqs.com 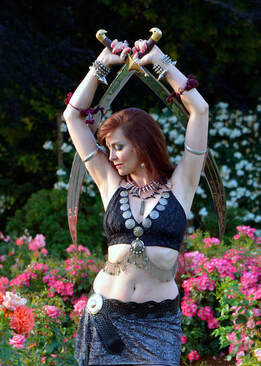 "Sabine fell in love with Middle Eastern music and dance back in 1985, when an exchange student from Jordon showed her some social dance moves and bought her a tape of Arabic music. Ever since, she’s sought out new music, new teachers, and new dances, from classic Egyptian and Lebanese cabaret to Arabic and North African folkdance, to Bollywood and Kalbeliya from India, to fusion dance styles. Sabine is enamored with the power of sword dance, and developed her own style of single and double sword presentation, blending martial arts and theatrical presentation with the dance. She’s taught her unique brand of sword dancing as far away as Australia, Asia, and Mexico, and from US coast to coast. She led the successful troupe Tribalation and student troupes Azhaar and Sister Celebration for many years from her dance studio in Eugene, and now resides outside of Roseburg on the North Umpqua River, where she’s building her dream dance retreat studio and finding inspiration in nature."
​ 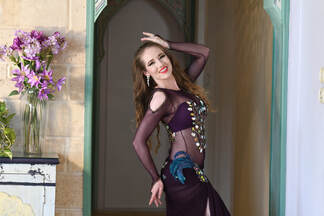 Laura Leyl is a multi-award-winning professional belly dancer based in Los Angeles. Laura is making waves in the dance community by bringing Turkish Oryantal and American Cabaret bellydance into the 21st century. She performs and teaches these styles, not as vintage relics of the past, but as modern, vibrant dance styles. Laura teaches in-studio and virtual classes. Check her out at www.lauraleylbellydance.com and on social media @lauraleylbellydance. 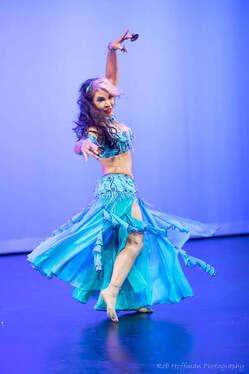 ​Nilay  was born and raised in Turkey, yet began Middle-Eastern and Oriental Dance studies in the US with many accredited teachers worldwide. She is in love with the passionate and versatile Turkish style. She teaches and performs in California and competes across the States and internationally holding multi-awards in various belly dancing categories which include but not limited to Taksim and 2 times Universal Champion in Belly Dancer of the Universe, Folklor in Belly Dancer of the World and Belly Dancer of the USA. You can reach her at www.nilay.rocks 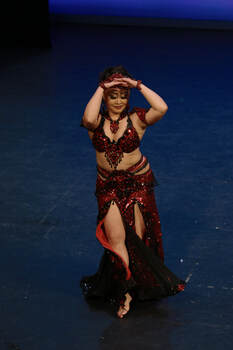 Roxy is the producer and owner of Oriental Bliss Productions, an organization that produces Oriental and Middle Eastern dance workshops and shows in Seattle and the Pacific Northwest. Roxy has brought to Seattle master teachers and world prestige artists from Egypt, Turkey, Hungary, Japan, Russia, Ukraine, Serbia, Canada, and the USA. Back in the 90s, Roxy studied Jazz, Ballet, and Modern Dance while in college for a B.S. degree in Computer Science. Ten years after college, to boost her physical and mental health, she took her first Middle Eastern dance lesson from Delilah Flynn. Roxy directed and later on became the owner of Zamani World Dance for 4+ years. Roxy won Miss Belly Dancer USA 2015 and the Champion titles at the Belly Dancer of the Universe 2015 Competition in both the Specialty Prop and Universal Categories. Roxy performs, studies, and teaches globally. For the latest workshops and shows, please  visit OrientalBlissProductions.com & TheOrientalDancer.com. 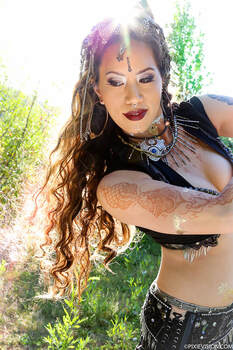 Lorraine Hanson is an award-winning dance performer and instructor, hailing from California, now residing in Oregon.
As a principal dancer of the Urban Tribal Dance Company, Tribal Feat, Subee Djinn, and a member of Desert Sin theatrics, she was also the mystery performer under the many masks of Unmata’s Blood Moon Regales.

She has incorporated fire props and magic tricks into American belly dance. Lorraine’s current offerings include a variety of flash mob style dances, tribal improvisation and fusion belly dance, as well as Ancient Polynesian and Tahitian hula-inspired fitness. She leads the annual Portland Shimmymob dance for children & women's charity for the awareness of domestic abuse. 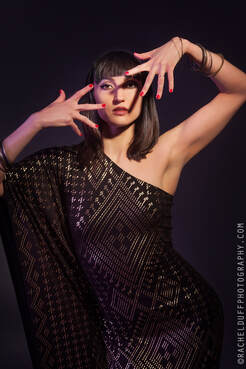 ​Laura Ayllón is an award winning dancer who has worked as a teacher, director and event producer. Originally a California girl she has spent most of her dance life oscillating between the SF Bay Area and Humboldt County, dancing to live music late at night in tightly packed city restaurants, to large dusty outdoor venues in the hot sun of the redwoods.
Recently relocated to Oregon’s Willamette Valley with her husband Gary, she is excited to have new opportunities, build community and make new friends. Laura will also be starting to teach classes in Corvallis very soon! 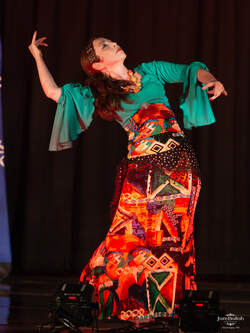 ​Elena Villa is a lifelong dancer whose parents introduced her to Middle Eastern music and belly dance in the late 1970s. She began flamenco studies in 1991 and has pursued flamenco and belly dance with equal devotion, often seeking out intensive study with native teachers in the U.S. and abroad. Elena began teaching belly dance in 1996 and flamenco in 2001. She performs with several professional live music groups, including The Bedouin Spice Orchestra of the OCF’s legendary Caravan Stage, where she coordinates the talent. Elena travels regionally to teach workshops, perform in theaters and at festivals, and work in educational music and dance residencies in schools and colleges with Flamenco Pacifico (www.flamencopacifico.com). Elena pursued her love of dance academically by looking at dance through the fields of literature, cultural studies, and performance studies and has a PhD in Comparative Literature from the University of Oregon, where she taught from 1998–2012. Elena currently divides her time between teaching flamenco, collaborating with other professional performing artists, and teaching writing, literature, and film at Portland Community College."

Since the age of four, Emilie Lauren has been involved with dance and gymnastics. She was a gymnast for seven years before moving on to classical ballet, which she continued to study in college. She took her first belly dance class in high school and has been studying belly dance ever since. Emilie has studied and performed a wide variety of belly dance styles, including ATS, American Cabaret, and Classical Egyptian. She has studied and performed in both the United States and Germany. In addition to her dance training, Emilie is a certified full-studio Pilates & Balanced Body Barre instructor.

Emilie draws on her ballet and gymnastics background to create her own elegant and athletic style of belly dance. Known for graceful floorwork, thrilling sword-balancing, and the creative and deft integration of silk props into her performances, she is a sought-after performer and choreographer in the Portland, Oregon belly dance community.  In addition to her solo work, Emilie currently dances with the award-winning Raqs Ayana Collective.  She was also a founding member of the influential Znama Dance Company, and an original member of Ashley Lopez's Allegro Dance Company.   Currently, Emilie teaches weekly belly dance, Pilates, and barre classes.

Cira's Bellydancing started at a time when beads and coins were hand sewn into your costume together and pantaloons were referred to as Haram pants. She's seen fashions and techniques come and go, yet never swaying from her love of American Oriental. With over 40 years of dance experience ranging from classical Ballet, tap and jazz, to her 30 years in the Belly dance world, you could say dance has been a life long passion. She has a passion for Middle Eastern rhythms and finger cymbals, and spent a good portion of her Bellydance career dancing in the night clubs and restaurants in the Portland area. Cira has trained multiple award wining troupes and students who have gone on to carry her lineage of training semi and professional dancers. 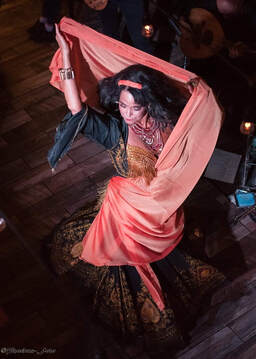 Portland Award winning icon, Nemra Khan, has been a performer, teacher, coach, choreographer and competition judge for over 40 years. She began her studies with the mysterious and inspirational Badawia, specializing in the style later to become known as American Cabaret. Nemra went on to study with many of the great masters and still takes workshops whenever she can. She still embraces the AmCab style and passes it on to her students, many of whom have brought home trophies and/or went on to become professional performers and teachers themselves.

​Nadira began her journey as a performer at the age of 6, starting with ballet, then hip-hop to jazz. She was introduced to Middle Eastern dance after a car accident she thought ended her dance career. Bellydance was the answer and has been an integral part of her life ever since. Nadira has become an accomplished performer, instructor, and choreographer, receiving five dance titles, two instructor awards, has been featured in multiple performance and instructional DVDs, and has traveled the world performing and instructing. She also created a full-length solo instructional DVD, as well as Saqra’s International Ambassador of Belly Dance (IABDC) Instructor of the Year.

She is currently balancing her mom & bellydancer lives, and has a hybrid of online and in person classes. She also just wrote & published (on Amazon) her FIRST EVER Children’s book, “How Tia Got Her Sparkle Back” as a way for her to not only explain the pandemic to her toddler son, but as a way for her to find her sparkle again. For more information on Nadira, DVD or classes, please visit www.nadira.com & Instagram: NadiraSeattle

Zaina Hart of Vancouver Washington is an instructor, coach and mentor to dancers around the world. As Belly Dancer USA 1995 she has that coveted tie and is always grateful to participate in this exciting event as often as possible. As the founder and former owner of The Double Crown Belly Dance Competition and judge for competitions across the US, she has experienced the competition stage through multiple platforms.
As a dancer, Zaina is described as grace itself, entering a stage and room with elegance, power and confidence. Passion and fire do not elude her. She will, in fact, wrap you up in it and leave you breathless for having joined her. Not only has Zaina forged her place in “Belly Dance” as a dancer and teacher, but also as a writer. Zaina has participated as a staff writer and assist editor for many of our trade publications. And as owner of the former Belly Dancer Magazine, aka iShimmy.com she has been able to share knowledge of our beautiful dance in an educational environment.

Souzana Van Horn is a multi-award winning belly dancer whose love of belly dancing shines through in both her instructional classes and performances.
Whether Souzana is performing a choreographed piece, or an improvisational work, her passion shows, and her dancing is always elegant, regal, and emotive.
Souzana’s strong work ethic and pursuit for excellence combined with her accepting spirit, inspires her students not only to work hard so that they may grow as dancers and performers, but also to remember to love and enjoy themselves along the way.
Souzana began her belly dance training in the late 90s at Kismet School of Danse Orientale in Salt Lake City, Utah under the direction of Yasamina.
Souzana specializes in Classic American Orientale style belly dance and Egyptian Raks Sharki. Her curiosity and eagerness to learn about other cultures also led her to study many other dance forms, including: Latin, West African, Polynesian, Jazz, Contemporary, Hip Hop, Tap, and Ballet.
Souzana is passionate about sharing her lifetime of vast experience and expertise in the performing dance arts with dancers of all levels and experience and is excited to join the panel of judges for Belly Dancer USA.